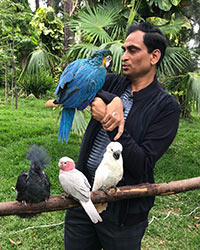 Born in the small coastal town of Cuddalore (Tamil Nadu), Mr. CK Ranganathan (fondly referred to as CKR) may have had a modest beginning but it was from this humble foundation that he went on to build a business empire spanning many verticals – The conglomerate CavinKare!
Having built a formidable reputation in the consumer products industry on the backing of its strong R&D, marketing and distribution capabilities, CavinKare is also the founding company behind the biggest company-owned Salon brands in India – Green Trends and Limelite.
Beyond the building of the mammoth brands as mentioned above, CKR gravitated towards starting a venture in a sphere that was personally meaningful and fulfilling to him.
Below, we’ll learn a bit more about the direction he took and the challenges that came his way as he set about making his pipe dream a reality …

A passion that took wing

While building his extraordinary business empire, CKR never forgot the one thing he loved and deeply cared about – His love of pets, feathered friends and animals.
A passion that can be traced back to his youth, CKR was always fascinated with the idea of turning his childhood hobby of caring for pets, feathered friends and animals into something more productive.
And so came about the professional team of Cavin International Pvt Ltd. – One of the most sought after breeders of exotic birds.

Today, having earned its standing based on expert medical methodology, ethical approach, and professionalism, Cavin International houses more than 2000 fascinating birds, two dozen canines, ponies and ostriches at two of its homesteads in Chennai and Cuddalore.
The homesteads additionally have a high yielding bovine farm at Cuddalore where high-end research exercises are continued. Groundbreaking in its many animal science innovations, CavinKare has consistently chosen the road less traveled and sought the highest distinction in the field.
As such, CKR has always placed the highest trust in R&D and believed that path-breaking R&D discoveries, specifically for Birds and Animals are a product of diligence and new-age science.

The Challenge that came unannounced

With livestock divisions, challenges can come unannounced, in any form, on any day. And so it happened with the team at Cavin International.
The team was confronted with tremendous tests in the form of health issues in their livestock of Birds, Dogs, and Cows with a few acutely sick cases in their farm at Cuddalore.
Moreover, no matter how hard they tried; the team couldn’t find a rational explanation behind the cause of the health issues. Even the exercise of looking for external expert assistance, both within India and abroad, was in vain.
Inevitably, perseverance reigned and it was decided that to find the ‘solution’, it was imperative to know the ‘why’ first. However, to know the ‘why’ the company would have to pump in resources to the tune of over Rs. 2 crores for the R&D alone!
It was at this point that the organization and the team at Cavin International adopted the belief system that “This is no longer a money problem, but an ‘IDEA’ problem”.

The light at the end of the tunnel

Surmounting the challenges thrown at them repeatedly, the organization figured out a way of raising an initial amount of 50 lakhs (INR) and the rest over time.
Over a dozen researchers involving Veterinary Specialists, Bio-Scientific Experts, and Microbiologists put in their hardest efforts to put in place a scientific breakthrough in animal care that not only had a widespread impact in the near-term but in the long-term as well.
To that end, the team procured high-end types of equipment such as the Real time PCR and worked on the molecular level isolating process besides quantifying several Bacteria and Virus.
Moreover, this detailed exercise was a key research step that was undertaken over and above the many basic types of equipment that were channeled for helping with the accurate diagnosis of the disease.

The why’s and how’s – The Roadmap

The extensive R&D exercise was aimed at unwinding the secrets of ‘how’ and ‘why’ the malady happened, and furthermore on the measures to control it.
What’s more, the belief system for everyone at the Group was to take a logical leap forward in understanding the unexpected nature of animal diseases and logically finding the panacea via research.
After executing a fruitful R&D methodology and conducting a detailed cross-examination of the infection, the team at Cavin International Pvt Ltd. inched nearer towards a fix for the disease. And by developing a complex set of procedures not only was the team successful at saving the farm but had also proved that it could give viable solutions to bird and animal diseases in the future!

Slow and Steady does it

Buoyed by the success of this R&D exercise, the Group developed surety & certainty and began resolving even the most complicated of cases related to birds, dogs, cows, and ponies by adopting a diagnostic methodology.
The team has been very successful in treating and recovering several complicated cases such as Mycoplasma in Birds, Babesiosis in Dogs and Theileriosis in Cows and have also learned the procedure for controlling the spread of infections in general.

Over time, the Sanchu Animal Hospital has gathered a substantial amount of knowledge in pet care. This has given us the confidence to offer this expertise to Chennaities and the rest of the world. As of date, we are highly regarded for our diagnostic capabilities, our eminent panel of doctors and committed team of Para-vets.
We envision to be recognized globally as the leader in Veterinary Healthcare.

Hi-Tech Multi-speciality global chain of
Animal Hospitals with state of the art
medical equipments and evidence
based treatment.

What our Customers Say

We are happy to Care Your Pets

Call us or email us for more details

We're not around right now. But you can send us an email and we'll get back to you, asap.